Passing of colours is the last event of every academic year. The house Master/ Mistresses and prefects pass on their responsibility to the new prefects.

The guest of the day were escorted towards the stage and were welcomed with an aarti. The troops for the march past were ready  and were examined by the guest and our Principal Rev. Sr. Alphonsa. The torch was lighted by the chief guest, which was then handed to over to Mast. Ayaz Shaikh of class VIII representative of Maharashtra in the Under- 19 Football matches. He ran a victory lamp with the torch. March past parade was judged by the judges.

Introduction of the chief guest and guest of honour was given by Mr. John. The passing of colours began, the office bearers and the house mistresses came forward and handed over their duties. Oup Principal then made a special announcement of new office bearers and new house Master/ Mistresses.

To conclude the Sports Week final few games were conducted and the Prizes were distributed to the sports winners by our dignitaries. The chief guest addressed the students and explained the importance of sports in Life. Our school flag was brought down by the Sports Master Mr. Suryawanshi, the Guest Mr. Ashok Bhanje (Dy. Edu. Officer)and the newly elected office bearers.  The flag was folded with respect and was handed to our Principal.

The programme was concluded by vote of thanks proposed by Mrs. Kausar and ended by National Anthem. 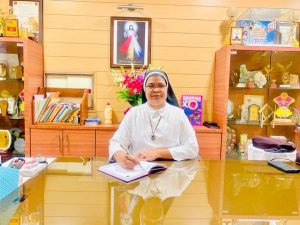